Haith is best known for its work handling mainstream vegetables, but its latest project shows the company’s expertise and capabilities extend well beyond potatoes and carrots.

The UK’s leading supplier of vegetable handling equipment has just released a video showcasing its seven-figure installation at Jack Buck Farms in Lincolnshire. The featured project delivered a 250% increase in washing capacity, a considerable reduction in water usage and a visible improvement to the finished product.

Operating in Spalding, Lincolnshire, Jack Buck (Farms) Ltd farms 1,700 acres of vegetable and flower crops. In 1992 Jack Buck began growing celeriac. Today, over 9,000 tonnes of celeriac is harvested with the majority of it marketed under Jack Buck’s ‘The Ugly One’ brand.

Julian Perowne, Managing Director at Jack Buck, initially contacted Haith about a new polisher. However, when he heard about Haith’s full range of machinery and services, including factory and process planning, he asked Rob Highfield, Sales Engineer, to look at how a more comprehensive project could help the business.

“Like many of the people who contact us, Julian was looking to tap into our experience and expertise to help him increase the finished product quality, process automation and the washing volume at the site. They also wanted to reduce damage, waste and water usage,” says Rob.

With celeriac volumes increasing every year and new business from supermarkets, Jack Buck was also keen to future proof the business and improve upon the traditional agricultural style machinery it was operating.

In the two months following March 2018, when Julian first contacted Rob, Haith’s design engineers developed an innovative turnkey solution. They started by creating a 3D model of the optimum layout to fit within a new purpose-built building, which would house a new wash and polish system with an integrated Haith water treatment system.

One of the significant issues Jack Buck faced was how to best remove the large amount of soil that attaches itself to the celeriac’s roots. Haith’s five-stage cleaning process though appears to have paid dividends.

Before the celeriac enters the cleaning process, it is unloaded by a side-eject Haith Rota-Tip SE. The fast and gentle all-electric box tipper features an innovative motion, in which the box isn’t lifted. Instead, the machine rotates around its centre axis and rather than being compressed against a lid, the crop gently flows onto a forward belt.

The Rota-Tip SE feeds the celeriac onto a Supa-Clean soil extractor which removes a high percentage of the soil before inspection; with the celeriac then moving into an inspection area with trimming tables. 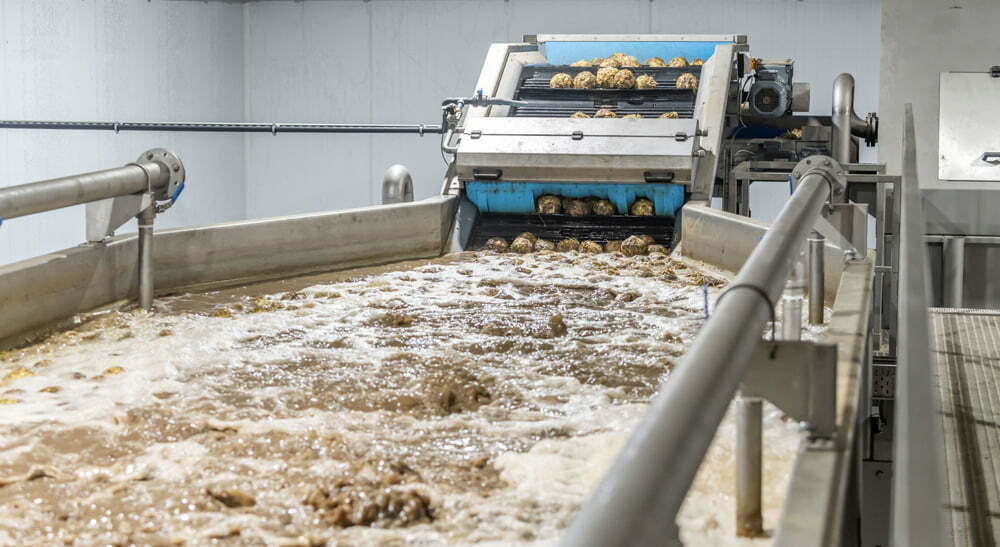 Any soil remaining within the roots is removed when the celeriac enters the pre-soak tank, which features Haith’s high-volume air agitation system known as the Jacuzzi Tank because of the way it operates.

After passing through the pre-soak tank, the crop is spray washed in a 5m barrel washer and polished by a 3.5m x 18 Brush Roller Polisher to remove the remaining roots. As you would expect from a company as innovative as Haith, the high-volume spray washer can also operate as a semi-submerged barrel washer.

Finally, the crop is dried in a Direct Drive Sponge Dryer before being sized and packed.

Jack Buck takes its environmental and social responsibilities seriously. The company is always looking to improve its practices and to reduce its impact on the environment wherever possible. This project was no different, and Julian was keen to both reduce water usage and also increase the volume of water that could be reused. To achieve this, Haith developed a bespoke Water Treatment Plant featuring multi-stage debris removal, lamella sludge separation and a de-watering plate press. The result is that over 25 cubic metres of water are cleaned each hour, with 90% of that water going back into the washing process, and a dry soil cake returned to the field.

“We are delighted that Julian chose us to deliver this large-scale specialist project for him. We work with several well-known potato and onion packers in south Lincolnshire, and we are extremely proud to include Jack Buck Farms in our portfolio of customers who have chosen Haith to design and deliver their project” added Duane Hill, Sales Director at Haith.

In the months since the line was commissioned, Jack Buck has been able to handle much higher tonnages than in previous years. The company has reused thousands of litres of water, and the quality of the washed crop is far superior to what could be achieved with the previous wash system.

“The entire Haith team did a fantastic and professional job,” says Julian. “The project was undertaken in one of the most challenging harvesting seasons we have ever experienced. The amount of mud we were bringing back to the packhouse was unprecedented, and without the new Haith equipment, we wouldn’t have been able to keep up the supply to our customers.”

“Not only did the new line enable us to keep up with demand, but it also allowed us to give our customers a cleaner washed product than before.”

“It was a pleasure to work with the Haith team and we received a truly turnkey installation from them. Our staff have a safe working environment. It’s clean, fast and easy to control, as it features the latest technology and software systems. We’ve seen the whole operation streamlined, and the process is now considerably quicker than before. If we’d hadn’t chosen Haith and made the investment, it could have been a very different story.

You can see Haith’s new video, which was produced by Pro Horizon, below.

To find out more about Jack Buck Farms click here.