Haith’s relationship with WM Morrison Produce plc dates back to the late 1990s, but it was in June 2017, that the supermarket set the company its biggest ever challenge.

“We had designed and installed many previous projects Morrisons in the past, and they were very pleased with them and the increased efficiencies we achieved for them,” explains Duane. “This time though the project was much more extensive and a lot more complicated.”

After visiting the site, Haith’s design team soon saw that the flow of the site was slowing production down. The offices and storage areas were located in the middle of the factory and were disrupting the flow of produce from intake to packing and loading.

Like everyone, Morrisons seek to get maximum value for money on their expenditure. However, with some of their machinery dating back to the late 1980s, there was no alternative but to look at a completely new installation.

Following several weeks of planning and refinement, Haith created an entirely new factory layout. Nine processing lines were removed, and seven wash lines were replaced with just two. The new lines represented a significant increase in throughput, being able to handle 30 tonnes per hour each compared to the previous lines limited capacity.

Haith’s turnkey approach to the wash lines saw the installation of a Rota-Tip TE box tippler for fast and gentle handling of the crop. The tippler is followed by a SupaFlume De-Stoner which feeds a Haith Supa-Wash, offering extremely low water usage and a cleaner final product, which contributes to a longer shelf-life.

Haith’s innovation extended to the grading line with the development of a bespoke 1830mm wide screen grading system, with twin agitator modules for accurate and gentle grading. The grading system is complemented by Haith’s Supa-Fill 400 and VertiFill Pro Box Filler which offers exceptionally gentle and even filling. 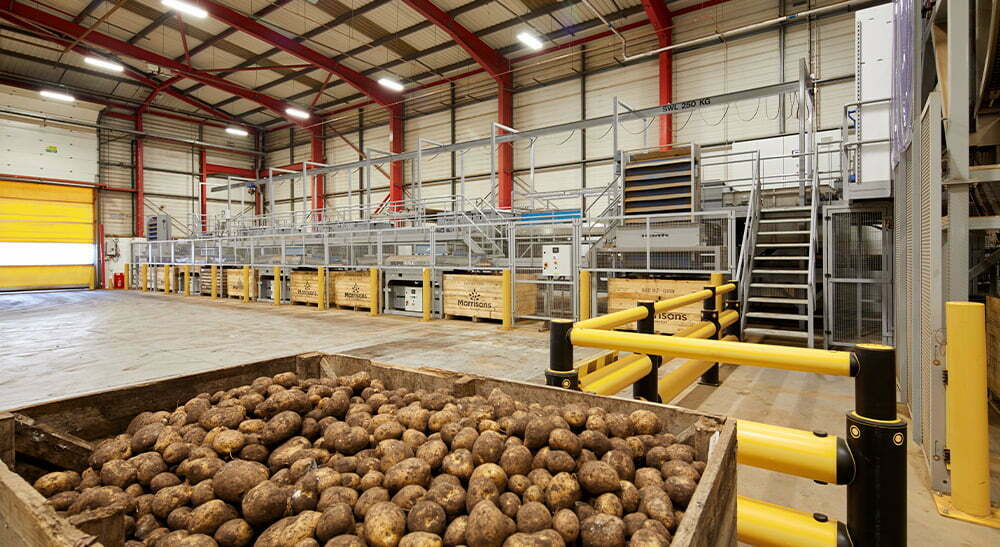 As well as improving the wash line and grading line, Haith’s innovation and detailed thinking are also evident in Morrison’s Quality Control area, where an automated potato sampling system allows them to forecast weight distribution in the crop accurately.

Haith also developed a custom automatic polisher bypass system for Morrisons, allowing the supermarket to add or remove the polisher from the line with just the touch of a button.

Optical sorters feature in both the in-take area and grading areas, which has improved the accuracy of grading considerably.

“This was a huge project for us,” says Duane. “Not just in terms of the value but also the scale of the challenge that Morrisons set us. Our proposed plans for the new factory were approved in August and everything needed to be operational in time for the Christmas rush, during which this factory runs 24 hours a day!”

“As well as designing a process that could operate for 12 hours a day, we needed to build in capacity for production to double.”

“We were also set a side challenge by Andrew, who wanted to see nothing on the floor, no potatoes, no water. We managed to achieve this by developing a new base tank for the sponge dryer. It sits underneath the dryer and is complemented by the installation of drip trays underneath all of the externally mounted bearings and transfer points.”

“It was an incredibly demanding project but one that we are immensely proud of.”

Most importantly, Morrisons are delighted with the end result. A state-of-the-art factory, with a flow that has increased efficiencies dramatically. Grading is now more accurate and at a higher capacity than before. Forklift usage has reduced by 90% and the potatoes going into storage are in tip-top condition.

“We knew that Haith’s approach would help us achieve our objectives,” says Jason, who oversaw the project with Haith. “We have worked with them for many years, in which time they’ve shown their reputation for building innovative, effective and quality machines is well-founded. We knew they would deliver for us and I’d go as far as saying that Haith is probably the only company that could have done what they did.”

Since completing the redesign of Morrisons’ Rushden site, Haith has designed and installed a new carrot washing and grading system at the supermarket’s Flaxby factory.